Many years ago I was in the habit of recommending John M. Swales’ 1998 volume to students whenever I had the opportunity. In print I even suggested it was a linguistics book “you could enjoy on the beach” (Gillen and Petersen, 2005).  But even strong passions fade and it has been a long time since I opened it.  When I decided to reread it, this was with some sense of purpose.  Since what are quaintly known as “new technologies” have become so pervasive, and the landscape of literacy research has changed so much, what would it be like to reread Swales?  More precisely, would his research, conducted when the internet was in its infancy, have much to contribute to the sociomaterial background I see language as entwined with?  How would Swales’ understanding of the relationships between textual artefacts and educational institutions resonate? More generally, how would the book stand up?  Would I want to recommend it to students again? 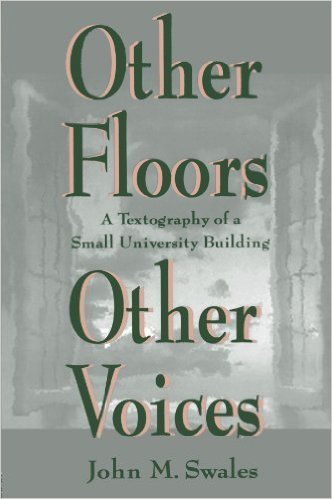 Other Floors Other Voices book cover

Rereading the book was a surprise.  I recalled delight experienced from its detailed descriptions of diverse academic pursuits, whether of the intricacies of the botanist’s life, or the creation of language testing items.  I had a vague recollection of the computer helpdesk on the ground floor, in the infancy of IT in Higher Education.  I remembered that Swales combined some ingenious methodologies and contributed a lot to the notion of “discourse community” in particular, which had afterwards been much criticised. I recalled that I thought this was one of the books, like some work by Gordon Wells for example, where a linguist could offer some tools and insights that could be of interest to any sociocultural researcher probing any area of social activities.  I thought that it would be particularly interesting to reread the book as from the early/mid 90s, when it was still possible to remember a world before the internet, having reflecting on computers entering homes and other spaces in that period (Gillen, 2014).

As so often, my memory was right in some ways, approximate in others and just plain wrong or forgetful in others.  Or, to put it another way, a rereading has been as provocative and lively an experience for me as I like to think the original was.  While continuing to frame this as a personal response, it might be worthwhile to continue this long blog/short essay by focussing on three issues that might be of interest to others working in a broadly sociocultural perspective.  The first two concern controversial matters Swales addresses.  The third is my claim as to what disciplinary territory this book might now be appropriated for, no matter where it was earlier located.

Swales explicitly disowns his work as an ethnography, “not a label I am comfortable with” (Swales, 1998: 1[henceforward page numbers alone refer to this book]).  At the risk of wild, unproveable generalisation, I would assert that this is more of an ethnography than 90% of the work that calls itself that. It was conducted over three years and combines a great number of different methods in the service of arriving at collaboratively constructed understandings.  I had forgotten the multimodality of the enterprise, in particular the use made of photographs.  These are not mere illustrations, but rather elements of sociohistorical data that are discussed with participants.  At a textual level, there is indeed wonderful attention to such matters as script, orthography and the materiality of texts, asking and answering questions arising from data such as “Why is this kind of text N, more important than text type O, always presented in a smaller font?”  The arrangement of rooms is forensically studied; the status of a half-open door as semiotic carefully probed. Most impressively of all is an openness to change during the time of study. So many of us might see “change as a way of life” (p. 38) as a great inconvenience, to be airbrushed out of our descriptions rather than investigated for what might be uncovered about what people are thinking through and choosing to act on.

This is surely an ethnography par excellence, combining observations, interviews, the study of artefacts and so on, all to gain access to the opinions, attitudes and experiences of a huge swathe of people concerned in some way with the building, whether immediately or at a distance.  This is sensibly handled, in the only practical way for writing up an ethnography, in a combination of carefully selected individualised aspects of experience, against a well described backcloth of contextualised interactions.

Why does Swales abjure the term ethnography?  I am not entirely sure.  There is the relatively familiar denial that this is a full ethnography, but many others would surely argue that such an aim is impossible.  Swales is interested in our “textually-mediated social world” (Barton, 2001) and has chosen for examination a setting in which people do a great deal of writing and reading.  Literacy practices are at the centre of this ethnography and of course for me that is part of the appeal.  I will write a little more about that later.

Swales’ rejection of the ethnography label was against the background of a then current dispute, and the questioning around the usefulness of the discourse community occupies a similar territory of contestation.  But whereas I thought I had remembered that the debate around the term took fire after Swales’ book, I had that wrong.  Swales identified already past as well as contemporary arguments as to whether the idea of discourse community stands up.

It seems to me that part of the still ongoing difficulty with the term appertains as to whether or not one focusses on the impossibility of defining any community, let alone a discourse community, in terms of what it borders.  If a border cannot be distinguished, if members cannot be clearly identified then some will, understandably, suggest that a term without clear definition is not worth its salt.  This is an extension of the idea of category in psychology: that it can only work if it delineates perceptible characteristics that are not shared. But my interpretation of Swales’ position would be to say let us accept extremely fuzzy borders and the empirical impossibility of resolving membership disputes.  This is consonant with the acceptance in agential realism drawn from quantum physics and the philosophy of science that even at the most microscopic level phenomena including acts of perception are primary rather than pre-existing entities (Barad, 2007; Suchman, 2007).

Swales presents textual evidence and related analyses, certainly, but these are always in the service of probing interactions between people on differing spatial and temporal scales.  For example he reproduces a letter from one botanical institute to another, requesting a loan of some samples (p.48).  His detailed analysis of the genre includes linguistic features to situate this letter within a well established practice of such letters, that include such conventions as who writes to whom, how the specimen requested is described, what uses can and cannot be made of it, and perhaps most surprising of all to the neophyte reader, the economics of the practice.  Considerable money is spent on preparing the specimen and packaging it off to the other institution although it might not be returned for decades if ever.  The benefit of examining the specimen might be evidenced in part through an exclamation mark, which in this field has a particular conventionalised meaning.

It is in the fine unpicking of such matters, through the examination of textual trajectories, interviews and external commentaries (journal articles and so on) that Swales is at his finest.  A convention is not a mere templated feature to be imitated, but rather has a rich historical background and affordances for today that are multiple and complex to those in the know.  Such people do not acquire such “craft-knowledge” (p. 51) overnight; it is rather a through a rich apprenticeship involving changes in practice, identity and expression.  Swales appropriately adopts here Lave and Wenger’s (1991) notion of legitimate peripheral practice and reminds us of some of its explanatory power.

So the usefulness of the idea of discourse community, in Swales’ account understood as often stretched across distance and time, in part enabled through online communications, is powerfully demonstrated.  My memory was at fault in recalling the book as largely or solely situated within a single physical location.  Rather, the internet was already embraced by many to new effect within their social context: Swales witnessed computerised search algorithms, an online catalogue of mycology specimens and even GIS.  For all, email was enabling faster communication across networks.

The jacket of Swales book claims this to be a “robust new genre – textography.”  I would not want to disrespect that claim, but suggest it can be complementary to others.

First then I have argued that this is a very fine ethnography.  It could be taken as a lively methodological handbook, offering up lots of suggestions to other researchers about multiple methods that might be adapted to the study of any social group or milieu.  There are matters to criticise here: for example although the voices and activities of lower status individuals such as temporary graduate assistants in the computer centre are presented, these are given less status than people with more prestigious academic positions.  But the combination of different kinds of evidence and how these are synthesised in presentation to the reader is exceptional.  I cannot think of another book which does such a good and entertaining job in preserving the voices of its participants while also offering plenty of the author’s own analyses.  One key asset here is the diversity of tools, including those of linguistic analysis that he deploys; another is the ethnographer’s crucial and explicit reflexive attention to his own role.

Second I see this book as contributing to Literacy Studies, and indeed Linguistic Ethnography in an era of turning to sociomaterial theory. (See for example Hamilton, 2009; Bhatt and de Roock, 2013; also Tusting, 2013 on the alignment between Literacy Studies and Linguistic Ethnography).  The relationships between humans and technologies require more nuanced treatments than calling this tool use, as in what we might term classical sociocultural work, such as that by Vygotsky (1987), writing originally in the early 1930s.

I am guilty here of seeking to define a book as contributing to a very different discipline, from that the author intended, –  “comparative rhetoric” in Swales’ case.  Indeed I can plead prior form in thaving claimed Hutchins’ (1998) work on distributed cognition as also capable of being regarded as a foundational text in Literacy Studies (Gillen, 2014).  Both authors seek to comprehend how humans learn, on timescales from the moment to the duration of cultural shifts, sometimes over decades.  They place language at the heart of such processes, while denying the implicit claim of so much work in linguistics that all that matters is spoken language (e.g. Podesva and Sharma, 2014).  Language as encountered in use is always in part shaped by the characteristics and circumstances of its materiality, whether a sign above a door in a building, an email, or a spontaneous aside during an interview.  The tools of linguistics can help in analytical work, but it is the combination with the ethnographic commitment that so impresses me still in Swales’ unparalleled study.

Finally, a book “for the beach”??  Well, I love Swales’ sense of humour and hope you enjoy it too, if you have not had that pleasure already.

Hamilton, M. 2009. ‘Putting words in their mouths: the alignment of identities with system goals through the use of Individual Learning Plans.’ British Educational Research Journal 35 2 221-242.