Tony Capstick is a Lecturer in TESOL and Applied Linguistics at the University of Reading.  He gained his PhD from Lancaster University as a member of the Literacy Research Centre.  We continue to be energised by his work and are delighted to share news of his book, with his fascinating account of the impetus for writing it. 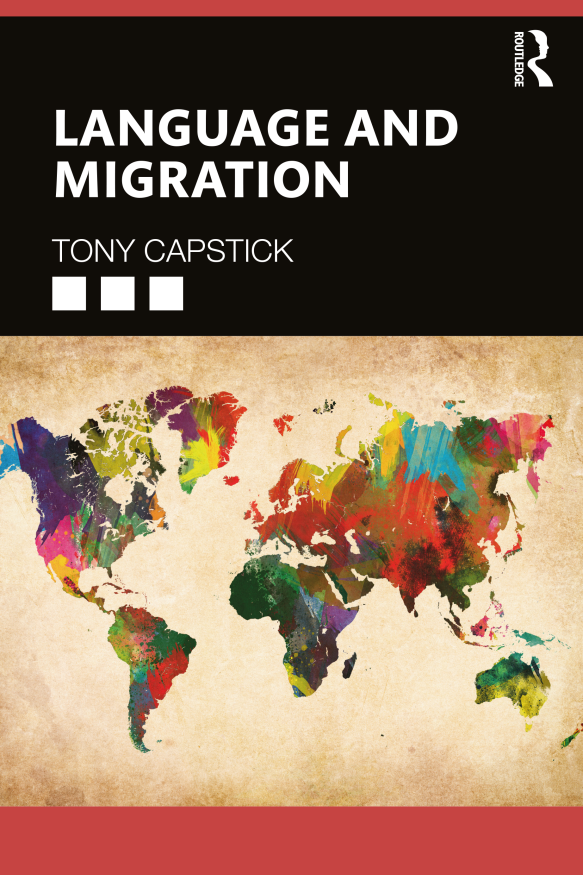 “I began writing the textbook Language and Migration in 2016 when I started teaching a final year undergraduate module of the same name and was struggling to find practical classroom activities that linked language use and language learning to specific contexts of migration. The book will be published this August – five years on from the initial idea. It’s taken this long as every additional year I taught the module, I realised the students needed a longer historical view and a more political orientation. Questions like ‘what’s the difference between colonialism and capitalism?’ from a graduating student meant exploring the links between the spread of trade and colonial expansion alongside language policy in countries such as India. What I learned after the first couple of years teaching young adults from the UK was that these kinds of question hindered theirs, and learners in other parts of the world, ability to look critically at the UK’s colonial past in order to understand the global present. As a result the book had to go beyond a discussion of the mobility of ‘languages’ and formal language learning, and focus more profoundly on how people communicate in families and communities before and after their migrations (the chapter on transnational families also looks at how Mexican family members who have no intention of migrating are part of worldwide networks maintained by language online). My own ethnographic work with migrant families in Pakistan helped me get started but then I needed to look out across the world – and ended up with a book full of case studies from four continents (going back several millennia!)

“In the first chapter it was important to establish that people’s desire to migrate is at the core of what it means to be human – so I go back several thousand years to look at early human migrations and the emergence of spoken then written language. Students felt that conversations about language and culture in the early sea voyages of Polynesian migrants helped prepare them for our discussions about the role of language and culture in the colonial expansion of European powers from the 1500’s. Identifying the role of language in empire-building (we look at multi-ethnic transnational empires based on Islam, Roman conquest and Chinese dynasties) became an important orientation for students trying to understand the importance of colonialism and decolonisation in today’s interconnected world. Decolonisation and immigration from the Global South to the Global North are not taken up in the book till Chapter 3 (Immigration and Migrant Language Education) so that students have developed a sense of the historical trajectories of migration before getting to grips with the outcomes of colonialism and slavery felt in the Americas, Europe and South Asia today. Examples from France, Germany and the UK are examined in this chapter. Next, the chapter Language learning and Inter-cultural learning takes the reader through the different approaches to language learning over the past few decades and helps situate contemporary understandings of language practices (e.g. translanguaging) in the planning and design of language learning programmes which shift the emphasis to the symbolic and translingual competence of learners, while keeping an eye on what it means to learn to read, write and speak world languages such as English. Detailed case studies from transnational families in Mexico and the US and Pakistan and the UK are just two examples that students respond well too – as are the in-depth analyses of the impact of London Jamaican on Reggae music and Multicultural Urban English on Grime.

“By applying theories from Migration Studies, Applied Linguistics, Sociology and Anthropology, the book takes an interdisciplinary approach throughout. It is this interdisciplinarity that gives each chapter a unique perspective on language and migration. I believe that it helps us to see how migrants make decisions about family language policies, about education and about marriage as well as decisions about language learning and language maintenance. It also helps students understand the role of language in discrimination, intercultural learning and countering ethnocentric understandings of the world. Discussions about ethnorelativism and cultural pluralism frame the later chapters on how we all live in an interconnected globalising world – shifting the focus from how migrants ‘integrate’ to how everyone belongs. All the activities in the book have been used in class – several coming directly from students’ response to classroom discussions. These activities do not shy away from asking difficult questions when unpicking the complexities and the different perceptions, sensitivities and levels of awareness which our learners bring to their discussions of contemporary social life. Voices from activists, civil society and critical education projects are included and there is a whole chapter on language education for refugees in which I draw on five years’ work in Lebanon, Jordan, Iraq and Turkey working with language learning providers in refugee settings – a lot of what I learned I hope fills these pages. Each chapter has an interview with specialists, including linguists James Simpson and Robert Philipson as well as practitioners and teachers. The book ends with an opportunity to look at the relationship between language education and Higher Education – from a critical perspective on the ‘global’ university and the internationalisation agenda. Working with the histories and subjectivities of our own student body, whether ‘home’ or ‘international’, forces us to question our own stance on decolonizing the curriculum. I hope that you feel that some of the content described here makes the book especially useful with ESOL learners and teachers trying to understand the socio-political context of language learning, as well as other disciplines within the social sciences, and on initial teacher education programmes or continuing professional development initiatives – in short, with anyone who needs to know about history and power in language education or migration.

The book is out from August and available to buy here for a reduced price in July: https://www.routledge.com/Language-and-Migration/Capstick/p/book/9780815382737