I’m finding this Edwardian postcard fascinating in so many ways. 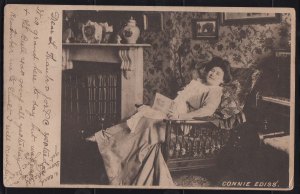 Its format is that of the very beginning of the twentieth century, when the whole of one side had to be taken for the address so people only had the small amount of space around a picture to write on.  Nevertheless it was a hugely popular communications technology.  It’s not at all far-fetched to compare this with something like Instagram today, especially as the postal system meant it could have arrived within hours of being sent.

Connie Ediss was an extraordinarily popular musical comedy actress and comedienne in her own day, gaining fame on the stages of London, Broadway, Australia and South Africa.  She particularly portrayed a witty Cockney persona and her choice of book fits with this: it’s Tony Drum (subtitled A Cockney Boy) by Edwin Pugh, published in 1898.

The message on the postcard is: “Dear L. Thanks for P.C. yesterday It is grand here today, but was nasty & the Bull was going all yesterday. Remember me to Ernest I will send him a card soon when I get a nice one love from ?? ”  It can be seen that sharing attractive cards like this was a common practice, many of them were then retained in collections and that is almost certainly the main reason the card was preserved until we obtained it.  I didn’t think I had any chance of working out what the Bull might be, but the information on the other side of the card led to the answer.  The card was sent from Ilfracombe so probably the reference is to the foghorn of the Bull Point Lighthouse.

It’s likely then that the card was sent by somebody on holiday in Ilfracombe (you can stay in a holiday cottage at Bull Point today, and you won’t be troubled by the foghorn).  It was sent to “Miss Cooke c/o Mr E Chambers, Martyr’s Fields, Canterbury”.  Many of the cards in our collection are sent c/o, evidence that postcards were both sent and received by people travelling, just as we use social media today wherever we are.

1 thought on “Reading (on) a postcard”