Back in August my travels in the Netherlands took me to the then newly reopened Mauritshuis and the  Rijksmuseum.  Both hold collections of paintings by Vermeer.  I followed this up by going to the Vermeer Centre in Delft, which aims to explore the artist’s work, but doesn’t actually hold originals (to my memory).

I realise everybody will perceive aspects of an artist’s oeuvre according to their own lenses.  Vermeer’s work strikes me as a tremendous portrayal of women’s literacy practices.  I thought that the commentaries tended to gloss over this, in particular tending to obscure women’s agency.

My images here are of poor quality, being my photographs of the reproductions in the Vermeer Centre.  I realise they won’t do well at conveying the artistic quality of the work, but perhaps I can say a little about the subjects and the ways they are described.  It’s true that the Rijksmuseum does give this good general introduction to such works by Vermeer, including: “His later paintings are meticulous compositions of interiors featuring one or two figures, usually women.  These are intimate genre paintings in which the subject is engaged in some everyday activity, usually in the light of a nearby window.” Their suggestion for categories in which you might seek further examples are: Daily Life paintings, Daily Life and Immoral Women. 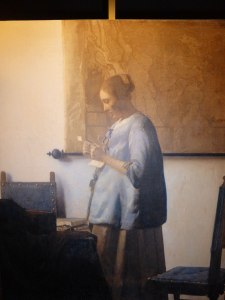 My first image then is related to Woman reading a letter.  The Rijksmuseum commentary as others discusses light and colour; aspects I’m not trying to discuss as I’m just focussing on the treatment of the literacy practices.  Here as the Delft Centre commentary, the woman is described as “being absorbed” or as “concentrating”.  The Delft Centre commentary proposes that implicit in the painting is “the absence of a lover.”

In the second image a young woman is writing.  The Delft Centre’s commentary is “Letters are a private matter.  But the lady seems to have no objection to our looking on.  She is clothed richly and with great care, and glimmering light dances over the painting.  Letter writing and vanity go together in the seventeenth century.”  Well, I am sure we can all reach our own opinions about that commentary.  It seems to me contradictory.  How can letter writing be simultaneously private and yet an occasion for vainly displaying oneself?  But leaving that aside, it is to me sad that the act of letter writing is turned into nothing other than a commentary on the subject’s appearance, itself then made the focus of some critical attention. 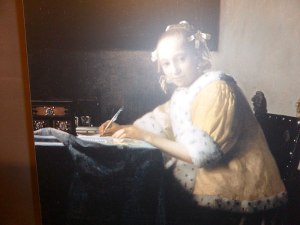 The third image depicts a group, all busily active.  I wrote the following description before looking for further information:

One young woman is doing something with her hands, possibly to the painting in front of her, which is also the focus of attention by the man, although we cannot see at all quite what he is doing.  Another young woman appears to be reading a letter aloud.  She looks very absorbed, and yet communicating to the others at the same time; for example through her hand gesture which actually neither of them are observing. To me, it’s a very intriguing painting.  I like the other signs of activity too, such as the material on the table in the foreground and the various kinds of equipment.  I expect the commentary to give me further information about what’s going on.

On looking online for further elucidation I’m first quite surprised to find out that seemingly my interpretation is way off. The painting, which was stolen in 1990 and is unrecovered, is called “The Concert.”   The first young woman is apparently playing the harpsichord, the second the lute (I still can’t see it, but I have realised that the foreground contains at least two instruments) and the third is singing.  So I seem to have been way off in my interpretation, judging from the helpful Wikipedia entry. It doesn’t discuss the placing of the figures, nor all the stuff in the foreground, which surely would be in the way of any audience?  I suppose the positionings indicate a very informal concert, perhaps to a tiny audience of intimates.

I do recall now, revisiting it, that I was a little shocked by the Delft commentary:  “A harmonious scene. Colour and composition, it all works together, just like a song perfectly sung. And much more virtuously than in The Procuress, on the wall at the right.  Nevertheless you can see an echo: two ladies and one man having pleasure together.”

I am no kind of art historian and perhaps these descriptions, stressing seductive appearances, lovers and so forth have a great deal of merit behind them.  But it does seem sad to me that Vermeer’s women, so active in their occupations, are only described in such ways.

If anyone is interested, I’ve collected more such images and commentaries on Vermeer’s portrayals of women and so could develop this with another posting.